Stepping off the plane in Kochi saw us greeted by a thick humid atmosphere, with the city staying a tiptop 30 degrees well into the night. We grabbed a taxi over to our new homestay ‘Good Karma Inn’ in Fort Cochin, almost dying of warmth on the way, so we caved and asked for the aircon by the end (Good practice for Aus maybe?). Despite the heat however, everything is so lush and beautiful here. Even as we were only leaving the airport, buffalos walked alongside white cranes in the shallow flow of the backwaters, with long grass, palms and tall trees covering the landscape. Even having seen as little as I have of Kerala so far, its clear to see why it’s earned the nickname of God’s own country!

Our guesthouse is perfectly situated in Kochi (FYI: Cochin and Kochi are two names for the same place), smack in the middle of it all on the island Fort Cochin, meaning everything is within at least 500 meters walk from here. One thing I’m most excited about seeing evidence of is the Kochi Muzirius Biennale, a huge and very cool art biennale taking over Kochi until the end of March in 2013 opened by M.I.A. a  few weeks ago. Although we only had chance to go for a quick explore this evening – there’s already evidence of it all over the city with street art, installations and lots of cool cars popping up round every corner. 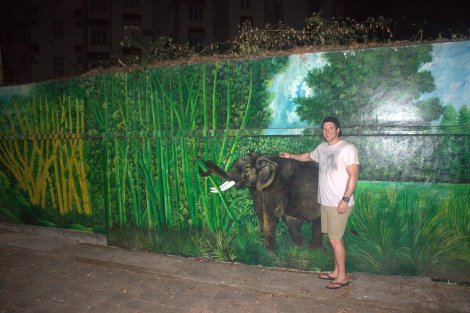 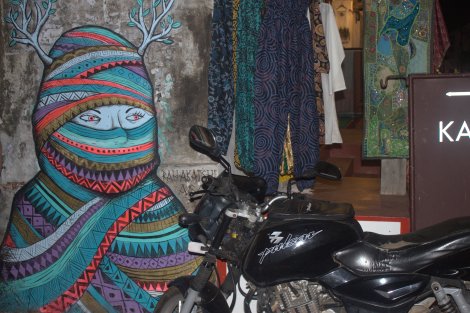 There are signs of the Biennale all around Fort Cochin.

The European history of the South, both in Kochi and when we were in Goa also, is really evident when walking around. There’s a much larger Christian community so far and lots of the architecture looks like it could have just been picked up out of central Europe. It’s an oddly comforting sight to see familiar sights but also slightly disorientating.  Whilst grabbing a quick bite in a local Italian restaurant, we found ourselves overlooking a huge Basilica for instance (checking that out when it’s a bit lighter!) which looked like it belonged in the Mediterranean.

The main language here in Kerala is Malayalam (a perfect palindrome!) meaning my Hindi is no completely at a loss. I really like the script of it though, so hopefully I might pick up a few phrases!

So until I explore it in a bit more depth, Over and out amigos!

2 responses to “Touching Down in God’s Own Country”