After already experiencing the disaster that was kayaking, the other major activity that remained for us to try before leaving Palolem was a boating trip over to the other island beaches, the main one being ‘Butterfly Beach’. So for our last full day in Goa we decided we had to make the trip!

Having just 1,500 rps in our pocket for the both of us and reluctant to spend much more before we left Goa, I was more than a little dismissive of the Lonely Planet’s idea of paying 800-1000rps for an hour at the other beach, so set off in search of some other people to share a boat with. Just as we became inundated with boatmen offering their boat to us, saying they definitely could not take us any longer than half an hour and to do so we’d have to pay at least 1000 etcetera, etcetera, I spied a group of women waiting down by a boat on the shore. Ditching the touts and approaching with my best smile I very kindly asked if we could join them on their boat and perhaps we could all pay less together. To our luck, they were eight of them (the boys off grabbing some brewskis), they had already haggled to have the boat for three hours, we only had to pay 400 rupees in total for both of us to join and best of all, they were a group of very lovely fun-loving Russians who insisted on calling Simon: “Bieg Freend”! 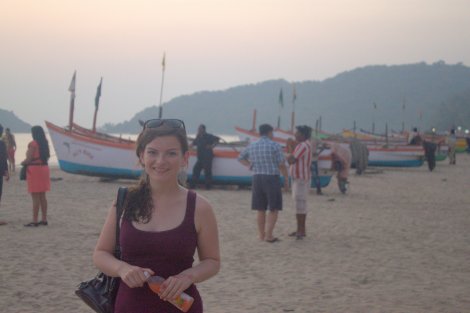 The boats lining the shore in the evening… 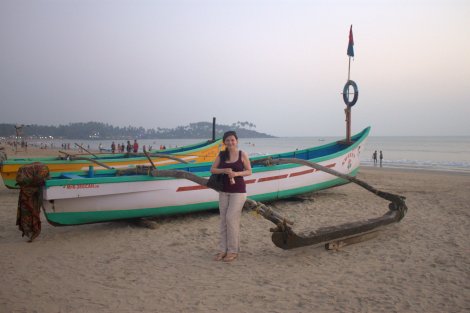 After being co-erced into having beer before midday – we were told firmly at the beginning of the trip that this was a condition of our new friendship – we boarded the boat and set off toward the beach. The sea was surprisingly rough, my new Russian friend Tanya and I getting splashed quite a lot at the front of the boat. The twenty minute or so ride allowed us to take in the surrounding scenery, with lots of the land being completely covered in forest.  With the green flag at the front of the catamarand flapping wildly in the sea breeze, I stayed hopeful for a dolphin sighting (lots of the boatmen run dolphin trips too) but was unlucky. The beach itself however did not disappoint.

Part of a little cove, the small beach was crescent shaped with large volcanic rocks on either side, huge smooth spheres covered in barnacles that poked out above the rolling waves. We made camp on one far  side(the Russians finding suitable shade for their stash of beers nearby) and went for a swim in the shallows. You could tell the beach was younger, with shells making up the majority of the sea floor rather than fine sand, but it was great! There was one part where is suddenly went much deeper – creating a hilarious moment when people wandered in too far and panicked before swimming off.  Once again, I don’t have any photographic evidence thanks to the Canon deciding the die that day (now thankfully recharged) but it really was beautiful! There was plenty of wildlife too – crabs darting in and out of nooks and crannies in the rock formations and eagles flying over head. As I’m a big scaredy-cat when it comes to this kind of thing I didn’t do that much climbing, but Simon also climbed as high as he could and assured me the tops of the rocks are also home to lots of spiders before hurriedly scuttling down twice as fast!

There were plenty  catamarands coming and going over the next few hours, so we sat and watched and drank whilst soaking up the sun. The Russian’s English was very limited (our Russian even more so!) but we managed to establish that they lived just outside Moscow and were holidaying in North Goa, in Calangute. They didn’t like it there though as they thought it was dirty and so kept planning day trips down to the South. They’d travelled two hours before even getting on the boat just to come to Palolem! They really were an awesome bunch, with one of them showing us photos of her son during National Service in full parade gear outside the Kremlin on her phone. Moscow looks like an amazing place to visit too – one to add to the bucket list! If the people are that great then I’m definitely in. They really couldn’t have been more stereotypical too which was slightly comical, they told Simon he looked like a sheriff in his aviators and loudly talked about Rolexes and vodka. Asking him how much his Nixon watch cost, one of them nodded and announced his watch cost a cool $3500 before showing us his ridiculously cool camera and his plans on going skiing in Austria the following week. We keep bumping into very wealthy people for company… not that I’m complaining! 😉

We couldn’t have asked for a better way to while away a few hours and it was nice to know when we got back to the beach that we’d make some good pals despite the language barrier. They were just so jolly!! I pointed them in the direction of some good restaurants before we went to buy some last minute gifts. I’d lost my sunglasses earlier too (that’s what you get if you dive into waves and forget they’re on your head) so grabbed a cheap replacement pair of fake RayBans. Much to Simon’s disgust, my fakies actually look really good alongside his real ones. Score! 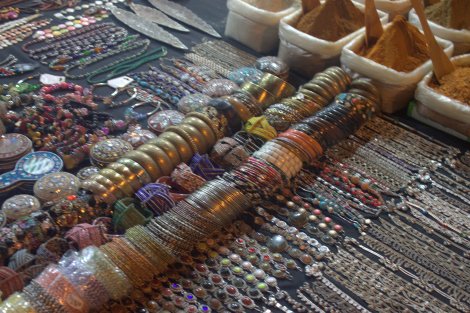 After sunbathing a bit more, we grabbed a bite at Café Inn before  going to pack ready for the next day. I really felt quite upset to be leaving Palolem and so decided to drown my sorrows in a glass of wine as a treat. If you ever get chance to come to Goa, I couldn’t recommend it more – Palolem that is, but the wine at Café Inn is pretty tasty too. 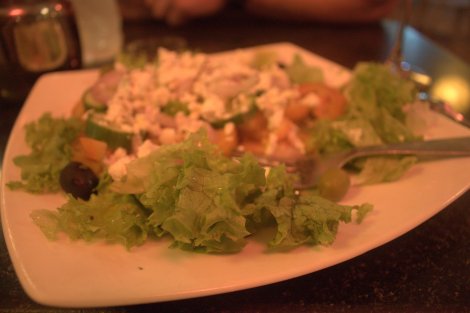 Over and Out Amigos,

One response to “Boats, Butterfly Beach and Bye Bye”

Error: Twitter did not respond. Please wait a few minutes and refresh this page.