I am very lucky to count amongst my good friends people who now live abroad and are willing to throw parties! Therefore when I heard my friend Dan was planning to celebrate his 30th in Amsterdam, I gladly jumped at the chance to visit both a new city and the opportunity to have a well needed catch up with people I genuinely miss.

As you can imagine, a large group of twenty-somethings descending upon Amsterdam meant plenty of the weekend was spent in bars  all over the city… I did however manage to squeeze in some sightseeing and it always surprises me how much you can fit into 48 hours if you really want to – even when battling a hangover!

In a welcome attempt to inject some culture into the trip, our Saturday afternoon started with a trip to Mikes Bikes on Kerkstraat, not far from Leidesplein. Amsterdam is extremely flat (gloriously so) and so we’d all been told the best way to navigate was by bicycle. Mikes Bikes was also central, quick and very reasonable at 9 euros until 6pm the following day so it made an easy choice. Following one another through the many bicycle lanes we made our way along the iconic city canals towards one of Amsterdam’s many markets. I absolutely fell in love with architecture in Amsterdam – I want a house by the canal! – spending most of the ride admiring the many wonky and lopsided facades that faced the water, only stopping to have a good gossip. Something about the shape of the windows and the shutters really appeals. That said, I’d happily settle for a houseboat if I had to 😉 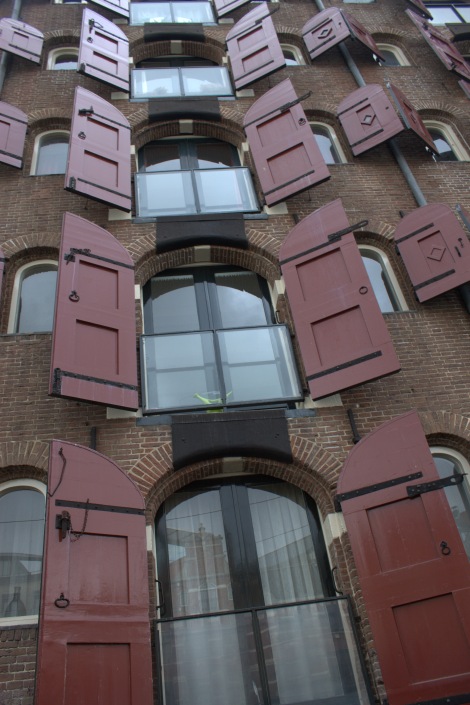 Once at the market we were greeted by food stall after food stall. The cheese in Holland is amazing and we may have indulged in a bratwurst whilst we wandered. The guy who served it to us was absolutely hilarious, offering us a choice of ‘dead pig, more dead pig, or dead fish’ and all of the Dutch people I met had impeccable spoken English. I had to make do with my “Dank-Ye-Vell” (thank you in Dutch) which although slightly disappointing in comparison, was at least an effort. I was also confidently reassured that the Dutch equivalent of Fish and Chips – raw herring served with chopped onion in a bread roll – was absolutely delicious, but after a night on the town I decided it was best to give it a miss! Others got stuck in and had raving reviews, I’m just not sure I had the stomach!

After stopping for a coffee and more catch ups, we decided to split up to pursue different sights. Dan had mentioned that the best apple pie in the whole of Amsterdam was available nearby so of course, we made sure it was our next pitstop. A market day in the area, the queue was out of the door when we arrived at Winkel 43, but it only took one glance at those eating outside to know it was well worth the wait. Huge slabs of golden Apple Pie, bursting at the seams with stewed apple and accompanied by a mound of whipped cream sat triumphantly on each plate. There was no way we we’re going to miss this, so we waited it out before grabbing a window seat and getting truly stuck in. 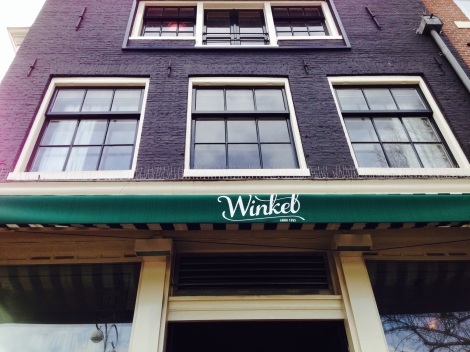 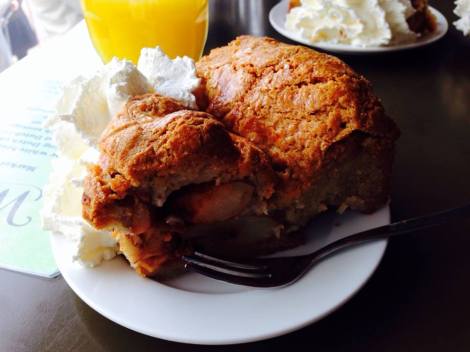 It was around this time that those more than a little worse for wear began to emerge. Back to Mikes Bikes we went to get some extra transport, giving a quick backie to those in tow. Once we’d gone through the process all over again, it was time to go and look round Vondelpark. Staying at the StayOkay Vondelpark, we were lucky enough to have it on our doorstep and it was such a idyllic place to spend a spring afternoon. Herons lined the waterways, people cycled, rollerbladed and took their little dogs for walks, whilst the cafe in the centre of the park served hot chocolate and yet more Apple pie…

The evening events were being held at the Badhuis Theatre that had been hired and so we didn’t really have much more time for sightseeing on the Saturday before heading back out again. We did however make a point of visiting the Red Light district at silly o’clock in the morning (after all, this is Amsterdam). Before you ask, we only went for a stroll but it was interesting to see something like that, as yet I’m undecided as to whether its something that I morally agree with – even if I think regulating prostitution has to be better than trying to pretend it doesn’t exist.