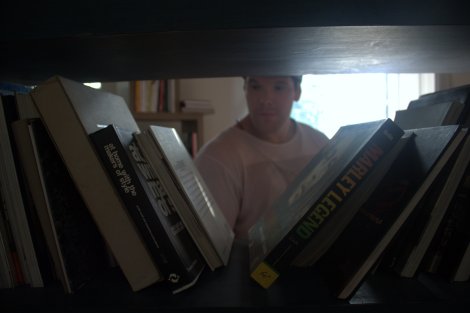 At David Hall Art Gallery. Brushing up on some art theory.

Our start to Kochi was unfortunately not the smoothest. After the excitement of landing in a new place, we quickly got up to head out to explore the Biennale and the shore, heading straight over to Aspinwall house, one of the larger venues, taking in the sights along the way. The Biennale itself is incredible and we easily spent a couple of hours looking around all the different exhibits in Aspinwall. The range of artworks was impressive, with lots of things that make you stop and think ‘am I really creative or are these guys just on a completely different level?’, a healthy dose of awe injected around every corner. Just as we were about to head onto the next venue however, illness hit. Not for me, but for Simon. Quite badly too! 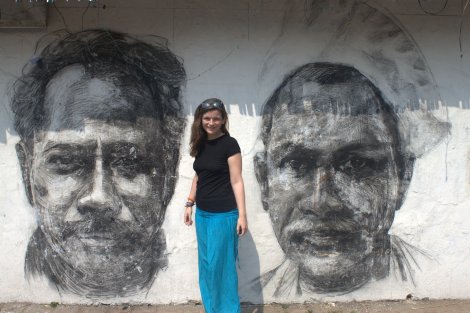 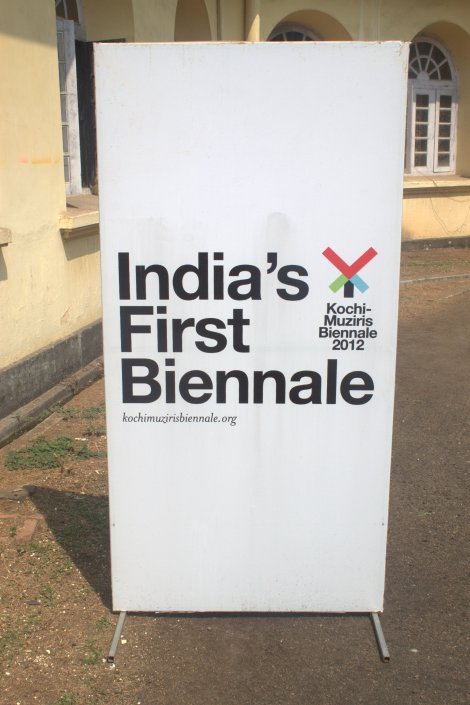 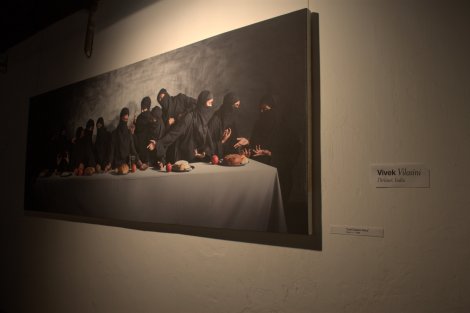 This was my favourite artwork of the day. ‘Last Supper-Gaza’ by Vivek Vilasini… 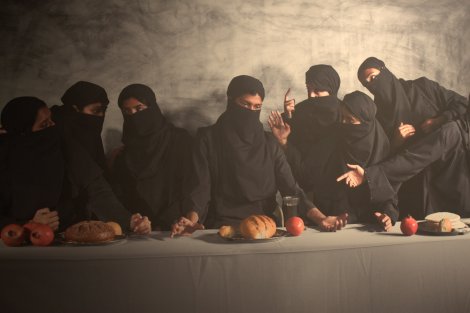 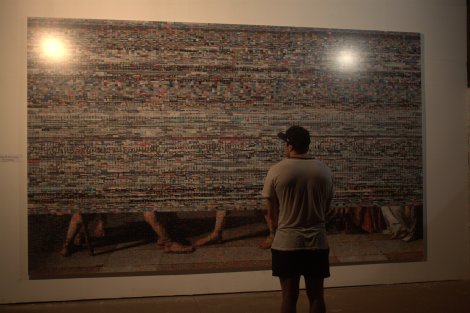 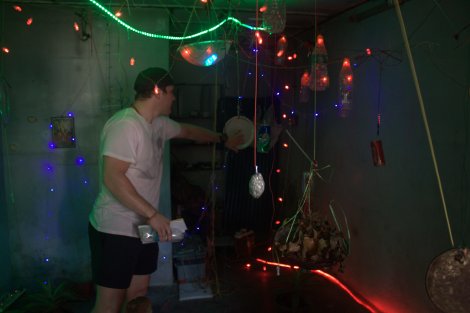 This exhibit was incredible! Touch the different objects to make different electrical sounds using currents. SO. MUCH. FUN. Next door you could put spices on bass speakers to make shapes too… 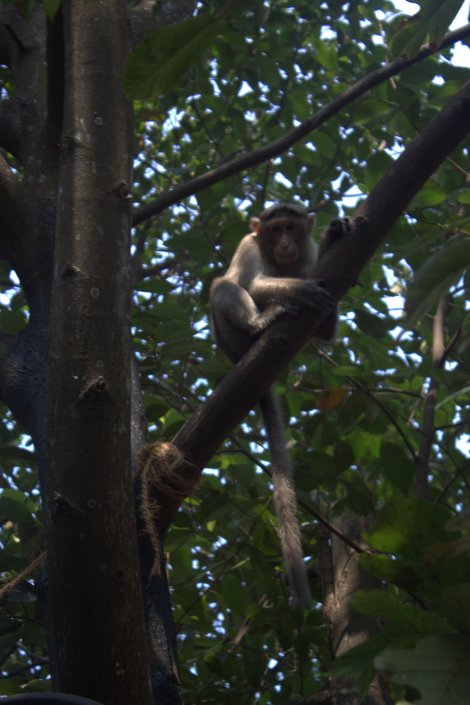 A monkey with a parting! Enough said. 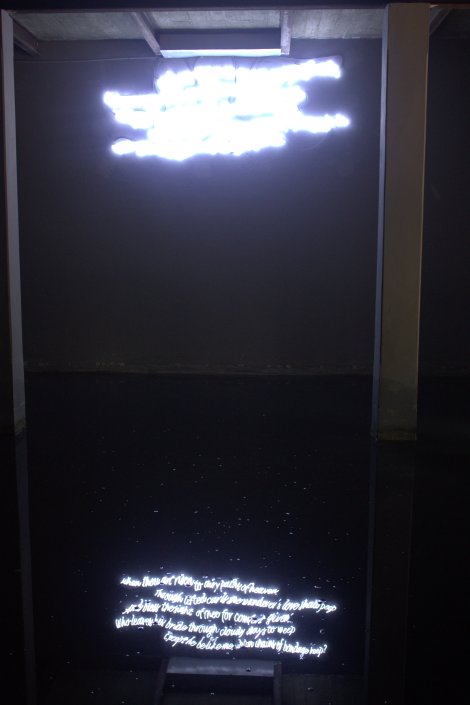 The writing on the wall reflected in the water on the floor. Only in the reflection could you read its poetry. 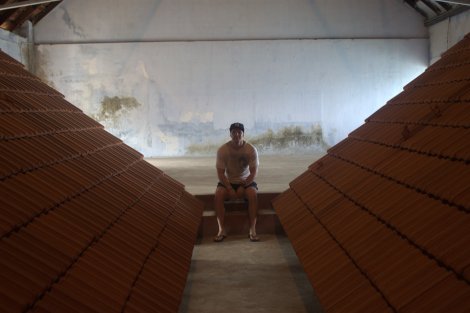 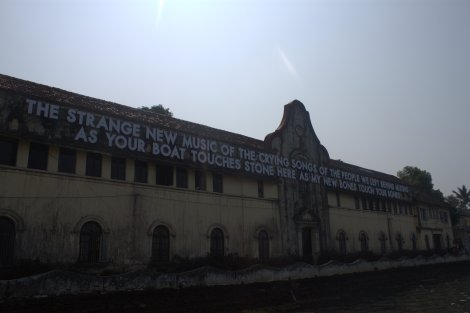 I loved this. It was in Neonlights so that the letters glow red at night too and can be seen across the bay.. 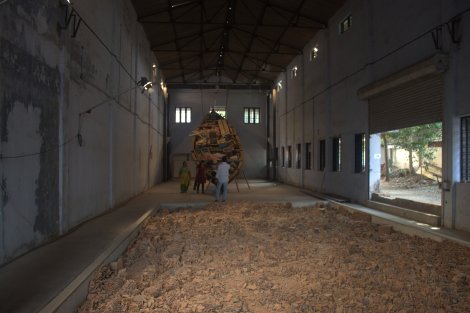 The bare interiors of Aspinwall House make such a wonderful gallery space. 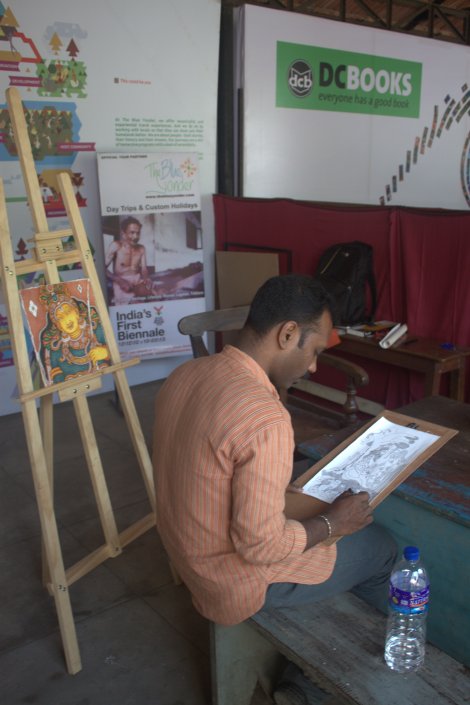 Not fancying my chances of carrying sixteen stone of rugby boy back to the guesthouse successfully, we then had to call it a day prematurely as he looked like he might hit the pavement any minute. Picking up essential supplies on the way – Coca cola being magic remedy number one – the rest of the day was then spent indoors.  Come evening time we tried to venture out again, but as soon as we got a couple of metres Si looked like he was about to hug the floor again, and we quickly had to scuttle back once more, leaving Liv to eat Pringles from the local corner shop on her own for dinner (not big and not clever kids). The next morning we were due to move onto another guesthouse, so I gave them a call too. They hadn’t booked us in by mistake and so had no room to give us. Great. We were meant to be staying with them later on too, so now I didn’t trust them for that either despite their assurances. The last minute search for a guesthouse began. After a little help from Good Karma Inn, we found room at the homestay next door at a much better rate, which was good, one point for Liv! The next day however, just as Si was starting to get  a bit more perky, Natwest decided to block my bankcard fearing it was being used for fraud. No money for Liv, no food for anyone. So instead of spending my day moaning about the inefficiency of India (a favourite pastime for the Indians),  I spent my day moaning about the inefficiency of England (a favourite pastime for the English), after my bank only just seemed to realise I was making lots of transactions abroad after 4 months of me doing so and me going into my local branch to inform them. High five Natwest. This saga lasted a few hours, but was finally resolved. Hurrah! Then I got sick too and we seemed to go full circle. Hur-urgh. So despite how amazing Kochi seems, we haven’t been able to explore it as much as we would like these past few days as our bodies seem to have gone on strike. I have however, become very fond of a Gelato ice cream place in town. Upset tummies need icecream right?! 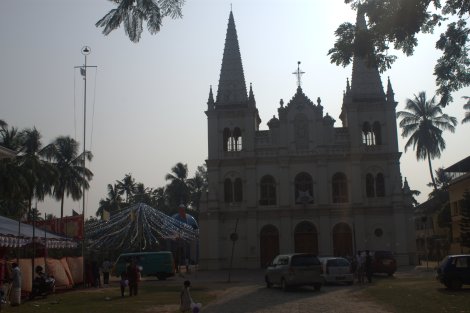 One of the few photos I’ve got from the last few days that isn’t the biennale : The St.Francis Basilica in Daylight.

So until I’m feeling a bit more alive amigos,