I think I’ve put off writing about our New Year this year because its one of those occasions which can often sound over hyped, or just plain boring, with no inbetween. So in an effort to hopefully sound like none of the above, I’m going to try and keep it brief! I hope you had an amazing new year wherever you are and have a lovely 2013 too.

After having such an enjoyable New Year’s Eve last year, Simon and I agreed that we had to do something completely different to see in 2013. Luckily its not all that hard to contrast a dark cold night in a Lancashire mining-town’s nightclubs with a beautiful beachside welcome to NYE, so we decided that this was our best route. The beach was always going to be the place to be, so we reserved a table at Cuba Restaurant, a local seafood restobar, where they place the tables down onto the beach at night and you can sit overlooking the shore. Seeing as it was NYE too, we put in an order for lobster and a seafood platter including a bit of everything (a bit much on the usual backpacker budget – but its NYE right?!). We made sure we also got a table overlooking the shore, so we could watch everything that was going on without any obstacles! 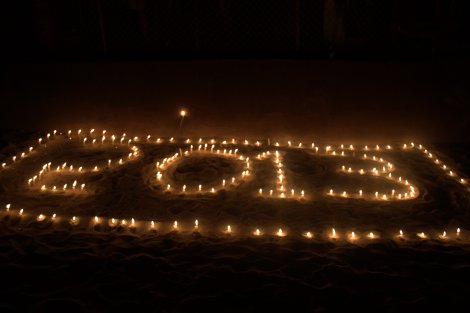 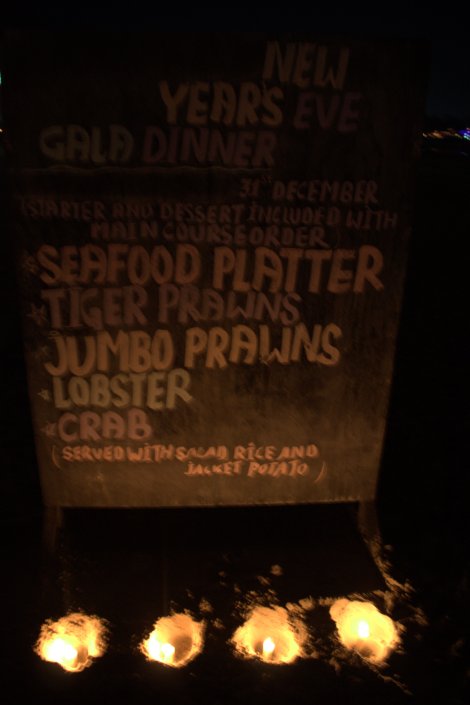 The menu outside Cuba for NYE…

When we got to the beach it was absolutely heaving. It’s usually busy, but such an event seems to draw everybody from all around and there was a constant tide of people going back and forth between the many bars and restaurants that line the beach. When we got to the restaurant it meant we had lots to watch with everything going on before us, which was great. Both Simon and I had never had lobster before, so we were pretty excited to see what all the fuss was about! Luckily it didn’t let us down one bit :). Of course it wouldn’t be a party without any alcohol too! Goa’s local wine is called Port Wine, its pretty strong stuff at 28.5% but I think it tastes great (a bit like dessert wine, kinda sweet) but the real killer is that its just 120 rupees a bottle (around £1.50) and that’s in a restaurant, so god-knows how cheap it is in the shop.

This is what I love about Goa : All fresh… just pick your fish! 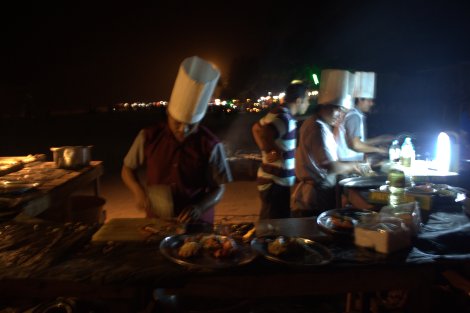 Is there a collective noun for a group of chefs? Never mind. Chefs hard at work on the beach..

Its antennae/things were pretty long…

As for the entertainment: the fireworks were relentless all evening and continued well into the next day! A bit like Diwali in Jodhpur, there was little concern/no for health and safety regulations, meaning you often got people almost jumping out of their skins halfway through dinner as someone decided to set off some firework or other. At midnight however, the whole beach exploded into a sea of light and colour, the whizzing, banging, hissing and crackling becoming a deafening roar celebrating the arrival of the New Year. By this point Simon and I had already started drinking further down the beach, following the surging crowds who seemed to just wander from one party to the next. Plenty of people were just drinking on the beach (why not?) and stray dogs howled as people decided to party wherever they went. Paper lanterns were being lit around every corner, becoming glowing dots drifting in the distance with the wishes of those who’d lit them carried along with them. We saw loads of drunk revellers decide to run into the sea too, but with the lifeguards and police on standby, it wasn’t long until they were quickly dragged back out again. We picked a spot on the sand and watched as the whole sky was lit up by colour. I tried to get a few photos, but firework pics never do a display justice!

Fireworks over the Sea 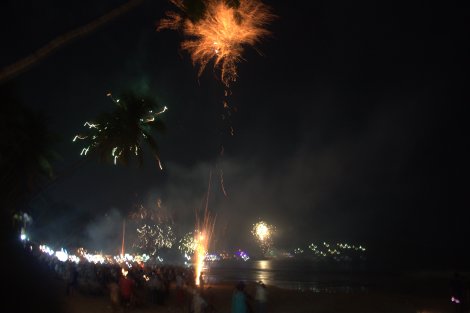 Fireworks being set off on the beach. 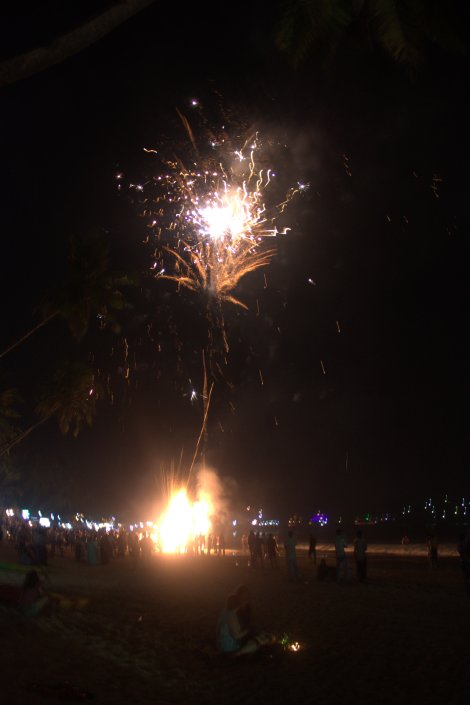 The beach was full of revellers from all over the world.