Having heard horror stories from fellow travelers  and most worryingly, from my own mother about riding camels, I wasn’t quite sure what to expect when Will and I headed to the front of the hotel in preparation to meet our new vehicle. Camels are so much bigger than I ever seem to imagine in my minds eye, like a giraffe has mated with an awkward giant Llama and had surprising results. I seriously doubted how sturdy any ride on such a beast would ever be. However, my imported prejudices were pleasantly proved wrong. Our camel, Moteen – who I assumed to be female but turns out to be a Mr.Camel after all – is the most obedient camel I have ever had the pleasure to place my English derriere upon – and the first! He didn’t do anything he wasn’t supposed to (I am reliably informed lots of camels just to sit down whenever they please) , didn’t spit or drool at awkward moments and even seemed mildly pleased to see us (see  the distinct lop-sided grin above). By the look of the carrier bag strapped to Moteen, this may have been a result of a recent retail therapy trip or an attempt to accessorise in the desert.  He was very well co-ordinated after all, Mr. Metrosexual Moteen.

Apart from Moteen’s brilliant fashion sense and photogenic visage, the best part of the trip was I didn’t even shriek. Okay, blatant lies. I screamed a teensy bit when he stood up – why stand up with your back legs first? Silly Moteen – and a bit more when Rajis, his trainer, decided to take Moteen on a bit of a jog mid-journey, and a bit more when he sat back down again….and perhaps a little more at intervals for continuity purposes. I was trying to hold a water bottle with my thighs, ride a camel and hold on for dear life, I am allowed to scream just a tiny bit. Will however, stayed super cool. Inherent man trust and all that. I found solace however in my direct request to Moteen that he just didn’t do anything weird. Kinda worked.

Camel Professionals in the making

As much as I enjoyed Moteen – he really was a happy little chappy – Rajis really made the trip. A seventeen year old who is still studying but helps his father with camel treks in his spare time, he is amongst the select few Indians I have met so far who had advanced enough English and the bravery to crack jokes with us all the way there and back. It paid off too, as he was truly hilarious. His favourite joke was how uncomfortable the entire journey would be for Will in the circumstances. Crude jokes all round.

The real deal at work, Rajis.

I’d been so busy thinking about imminent camel related deaths I hadn’t even considered where we were going. Turns out, there was a  small Hamlet not too far away we were headed to for some chai and a chill. Sounded good to me, so I stopped envisioning the most imaginative death possible (by this point I’d decided some kind of impromptu ski-jump off the camels neck was the most likely cause of broken bones, which would then lead to an early grave) and started to look at my surroundings. The Thar Desert was nowhere near as deserted as I would have expected. Wild peacocks openly strutted around everywhere you looked, cows were just as chilled here as their cousins back in Jodhpur and camels lazed about, eating what they wanted from tree to tree. That’s the other thing, I thought sand meant no trees or crops, but quite a bit grew here. Admittedly large areas were sparse but millet was a popular crop, along with watermelons, oh and cannabis. Lots of it. Both Will and I sputtered in disbelief when we saw how openly it was growing, but nobody else blinked an eyelid, suppose that’s India for you! If people were any more laid back here they’d be horizontal.

Anyway, back to the hero of the story, which is clearly Rajis. Our comedic guide led us up the sand dunes and down the dirt tracks to the houses we were destined to drink chai in. As we approached, hollers in Hindi started to get passed from the hillsides down towards the huts – which at first sounded like a worrying war cry from small children – until everyone was suitably informed of our arrival. The hamlet consisted of three huts and with all the adults out in the fields or working, it reminded me of a scene from a Bollywood Bugsy Malone. Children sat and ate in the huts whilst Rajis ground up some dried beanstalks in his hands, offering his foodstuffs out toward us. Although impressed by his skill, both Will and I eyed the beans with caution. Laughing, Rajis told us to watch him as he ate and gave us a big friendly grin. We gladly accepted them after that, munching the beans down as Rajis waggled his head in amusement and headed up to the roof of the first building. We followed, finding more bean like treats drying here too. 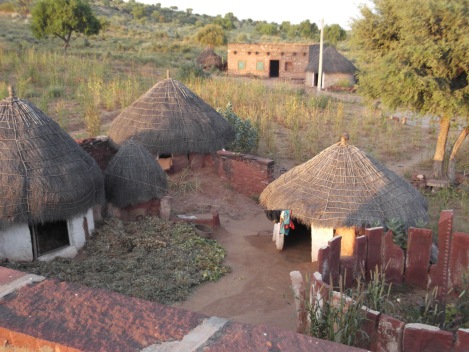 Up to our ankles in unknown desert beans… literally.

The kids in the hamlet were great, one finding Will’s facial features hilarious for no apparent reason. They took time to show us their Mendhi (henna), necklaces with incarnations of Krishna on, and kept going back and forth for more desert beans whilst bringing us Chai and watching the sun go down. Even little Indians have the hospitality down better than anyone else! 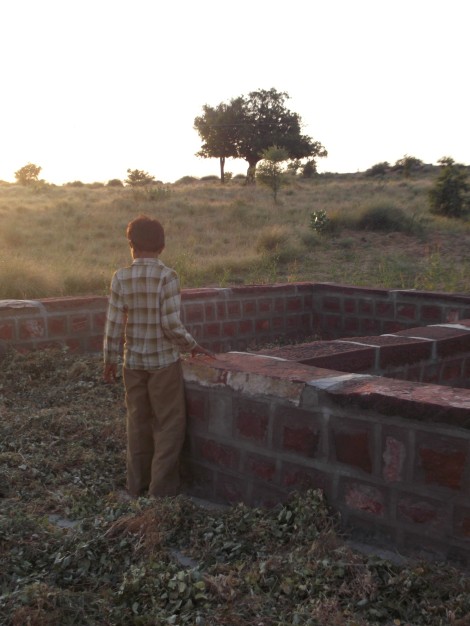 After our lovely chai, and our even more lovely company, we plodded back on Moteen to the Camp again. I felt much more comfortable this time around, Rajis found my shrieking slightly less amusing and we even managed to run part of the way! An absolute dude came past on his camel at full pelt just ‘cos he can and I even had the enormously overdue revelation that not only can peacocks fly but they sleep in trees! I suppose because they’re kept as foreign pets in England they have their wings clipped to stop their escape, but the peacocks here were very good at flying away. So much so, that the only pic I managed to capture was a blurry one but I think you can make it out. You get the point.

A peacock. In a tree.

This was the part where we had to leave our temporary hero, but we took his business card for good measure. He truly was a dude. We didn’t have any time to waste however, as it was time for the cultural program back in the main camp, with Rajasthani traditional dancing. Despite the lack of alcohol, we all got involved! I can strongly recommend it. The dancers looked gorgeous in their garb, whilst the band seemed to be having the time of their lives. Topped off with a great dinner and collapsing back on our nice big soft bed, I think I can safely say that the day was a day well spent!

The best guide we could ask for 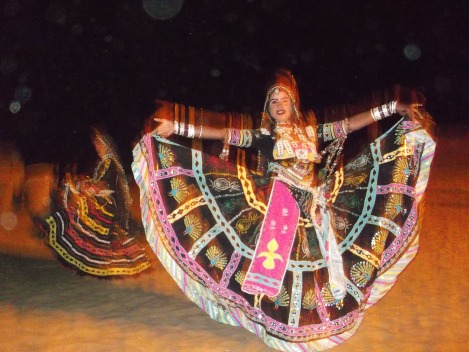 Everybody get low…low…low low low…

Over and out x