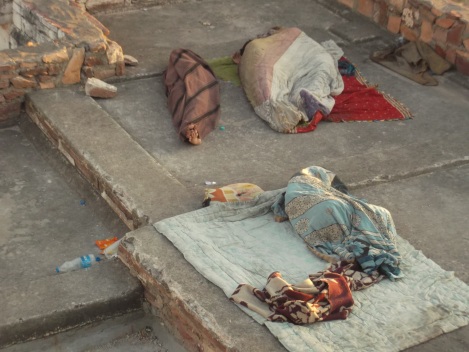 People sleeping on the rooftop next door.

During Yoga a few days ago, I looked over the edge of the roof and saw the image that you see above, and wondered what I should make of it. Maybe they wanted to sleep outside because it was cooler, which is completely understandable. Maybe they like to see the stars at night and that certain feeling of freedom that comes with the great outdoors. Maybe guests were staying the evening and these are the hosts who gave up their own beds in order to accommodate them. Maybe it was the only bit of room they could find in which to sleep. Or maybe the family below are renting out the space to others, for profit or in an act of kindness. Maybe they just had nowhere else to go. All of these are possible and I’ll probably never know. Now I’ve had the mind to look down once, I see they are there every morning and I still don’t know what my reaction is meant to be. Nonetheless, it got me thinking about inequality in India whether that be through poverty, prejudice or tradition.

India has been many things for me so far, friendly, surprising, exciting and incredible to name a few. But in coming here to work for a luxury travel company, I think I’ve sometimes tried to shy away from the parts of India which I thought might tar my love of it, or perhaps make me feel guilty about my part in the world I dabble in here. Even when I’m trying to blog about it, I don’t want to offend or sound patronising by discussing a subject which I’ve only experienced for a few weeks, and especially one which I have  not experienced first hand. This I’ve realised however is a total idiocy. If anything, by actually sitting down and thinking about these things or discussing them with my Indian friends, I’ve only increased my appetite for the people here and sparked my own interest in what this means for both communities here and at home. In the same way that Rajasthan’s palaces are part of India, so too are many of its problems. If I want to experience the country fully, I’ll have to take the rough with the smooth. I believe that India is incredible in so many ways, it’s a country that’s on the way to changing for the better, with the cities spearheading the assault and creating an impact. It’s partially this process of change that makes it a very exciting place to be.

Primarily I decided that all that separated me from the people who sleep on the street is some bits of crumpled up paper in my pocket that have already been passed around numerous hands, pieces of manipulated metal that have been engraved and most essentially, a thin wedge of plastic that can help me get more of these bits of shrapnel. A poetic idea I think and correct to an extent, but not one that is fully accurate in reality. Before I delve into my more recent observations however, I think it is worth pointing out that I am a staunch capitalist. I believe in making money, money exchanging hands, encouraging competition and have no faith whatsoever in communism. Why pay everyone the same if they do different things? Some people may have more money than others, but as long as they’ve earnt it and employ others with fair wages, that’s fine by me. I don’t believe in crushing the people without any cash to hand. Capitalism and Conservatism are two very different things in my eyes. Business drives change, forces people to think differently in order to survive whilst a conservative system that protects only its own,  relies only on traditions and class systems stifles new talent and ideas from coming to the fore. Capitalism may take no prisoners, but it does so whether you were born an aristocrat or a pauper. This is precisely why I think you can pinpoint India’s huge progress over the last 50 years to those within India’s big cities, the powerhouses of Delhi, Mumbai, Kolkata, Chennai to cite a few examples.  But a laissez-faire approach is essential, which is where I believe India, especially in its more conservative areas, currently starts to stumble.

So there’s more between me and the people on the street than just money. It’s a large factor, but not the only one. In a perfect capitalist system that would be the only difference, but in a country as diverse and developing as India it’s not. In fact arguably its not reached that point anywhere in the world yet, I’m almost certain of it, but I don’t have time to discuss everywhere in the world in one post. To begin with England has a class system, one that I think is more prevalent than we often care to realise, but hardly anyone can stop you from progressing because of where you were born as long as you have the skillsets and ambition to succeed. India has ambition by the bucketload, but in certain parts there are whole groups of people who sit right at the bottom of an outdated caste system and who won’t be offered employment simply because of who they are. Royal privileges may not be available to me because of my birth, but when I go for an interview its an unlikely stumbling block.

On top of this, I had an opportunity to go to whichever school I wanted for free because the law says I should have an education. People can pay to go to private school and other schools may be better than others, but there was no way I would be left without basic literacy or numeracy skills because I couldn’t afford to go. The reality of life here is I have met plenty of people who can’t read and write because of circumstances at home which meant they could no longer go to school. More than that, Hindi is the main language, but English has been made an important part of everyday life. Not only do you need an education, but increasingly one which will leave you fluent in more than one language. Not to mention the thousands of people in India whose main language isn’t Hindi at all.

Furthermore, in the UK we are still struggling to eradicate sexism and we have a long way to go, but we have come far enough from the suffragette movement that a woman is free to work as she pleases. If she wants to stay at home then that’s fine, but we know that many women want careers as well as families. The first often supports the latter in many cases, yet that is certainly not the only reason why women seek employment and every approach is as respectable as the other. In this respect, many of the larger Indian cities are identical to the UK, housing plenty of vivacious career-minded women who are completely independent and doing it for themselves, nobody else. Bollywood blares many successful women onto the countries screens on a daily basis. It’s not that the women in the rural districts are any different, just that currently a mentality of inequality is barring their path. It’s still shameful for many women to seek employment here and not only that, but many people will employ a man over a woman or feel uncomfortable working with females who are better qualified than themselves. The capitalist giants who are often frowned upon in the west, such as McDonalds, who are building franchises here with their equality schemes, are a godsend in this regard. I saw more women in the workplace in the one McDonalds in Jodhpur than I had seen anywhere else in the city, rivalled only by the equality of employment in the high end tourism sector. The new luxury hotels of Rajasthan employ more women in equal measure than their middle class counterparts. It’s not about forcing women to work, it’s about providing the skillsets and the freedom to do so if they wish. I think the Indian companies who are making money and changing the way they work are the ones changing the future faster than any corrupt government ever could. One only needs to flick through Indian Vogue or Conde Nast to see the young entrepreneurs who are changing the way India operates. Or by looking to many of the bustling IT sectors, event companies, manufacturers and designers popping up everywhere. In fact, just take a trip down any of the busy major city streets to find plenty of examples!

Don’t assume for a second that the average Indian doesn’t know this, of course they do. The locals here are more than happy to tell me how corrupt the government is, much in the same way that we moan about our thieving MPs back in Blighty. Lots of men and women will openly talk about the importance of education for all, along with how India’s opinion of women must and is beginning to change. The most important thing I think India has taught me so far is that inequality doesn’t help anybody. For every tale I’ve heard of a woman who struggled because she couldn’t work to support herself, or her siblings, there’s another of a male who has been on the poverty line because their father wouldn’t or couldn’t support them and their female relations didn’t have the means to do the same. Plenty of people here have had their lives made harder made by inequality, even if that inequality shouldn’t have theoretically affected them. But then there’s also loads of success stories, illustrating people making the most of what they have and multiplying it in the face of adversity. Like I’ve said in earlier posts, the ways things are done is rapidly changing in this wonderful country. People here do not lack in intelligence, innovative thinking or ambition. So now I’ve got some other things to add to my list, India is pretty inspiring and motivational too.