Desperately trying to resist the urge to sleep until midday on a Saturday morning, we started off our first day by jumping out of bed at eight to explore Sydney in what would be an unashamedly tourist box-ticking session. Grabbing a quick bowl of coco pops in the communal kitchen before heading down to reception, Simon and I jumped on the free CBD shuttle, which luckily for us, stopped right outside our front door (yay for YHA) and at most of the major sights. Significantly cheaper than hop-on hop-off tours and convenient too!

First and foremost of course, we had to make our way down to Circular Quay to see the iconic Sydney Opera House and Harbour Bridge (I couldn’t help but look at it and think of every NYE ever).  We’d actually already made the trip down to the Quay the previous evening, but being dark and feeling more than a little tired from wandering around the city with the excitement of it all, we were determined to come back in the daylight. 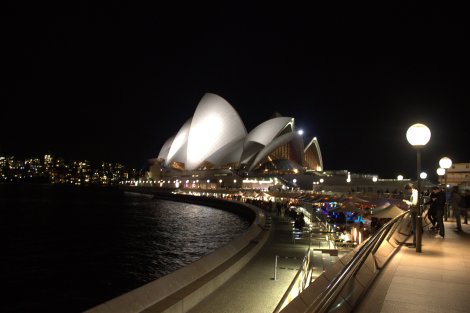 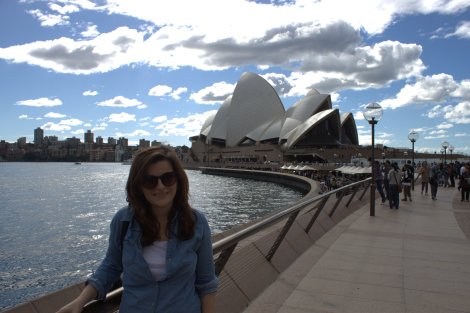 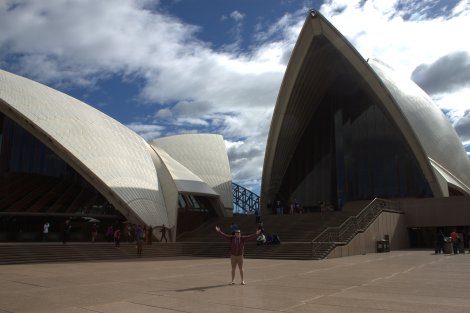 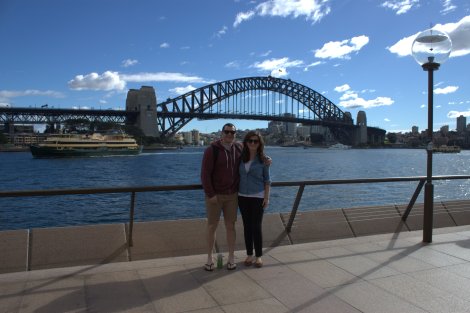 As you might expect, the Quay was absolutely swarming with tourists, making it a killer spot for all the local street acts. Simon had a knack for wanting to stand and watch every single one, making it a slow amble back to the wharf for the ferry. 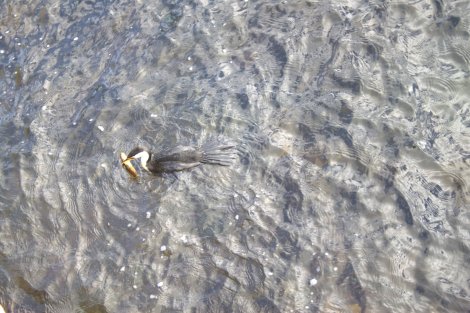 This lucky bird caught a fish (which we also had to stand an watch whilst Simon wished he could attain such a fantastic body weight / protein intake ratio). 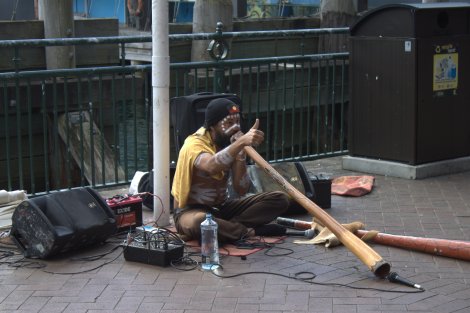 Digderidoo artist at the Quays.

Everybody we’d spoken to about Sydney recommended we grab the transport ferry over to Manly Beach for the best views of the harbour instead of a cruise and we weren’t disappointed, grabbing a seat at the front to make the most of the great views (not bad for $15 return each). After 30 minutes transit, we stopped and had a classy ALDI med combo in the sunshine down at Manly Beach (ALDI = backpackers best friend), checking out another street performer who we’d seen on Aussie Xfactor (imagine Justin Bieber before Usher got his greedy little claws in him). After a bit of a wander round Manly soaking up the sun, we jumped on the ferry to go all the way back again – views galore.* 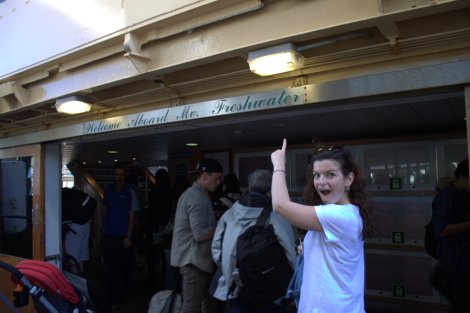 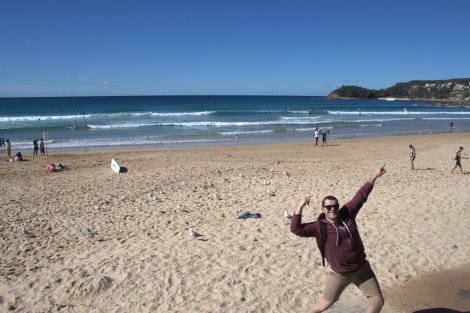 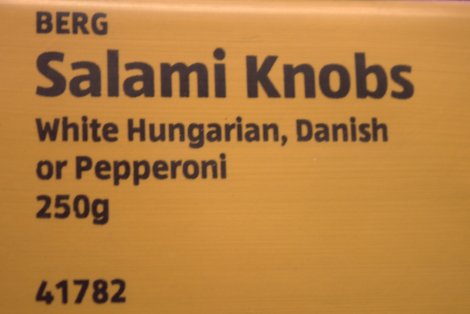 An ALDI treat for the day: Immature? Us? Never. 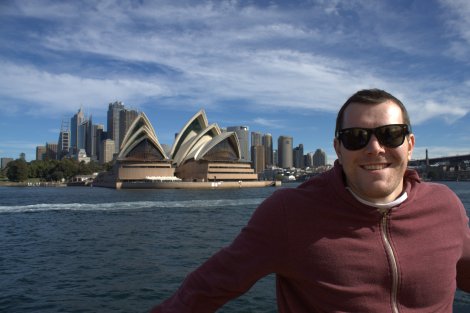 One of many kodak moments from the ferry.

After disembarking, we checked out The Rocks, along with their markets, before wandering up towards to Harbour Bridge again. I’d really, really wanted to do the Sydney Bridge Climb but couldn’t quite justify to $200+ to myself when I considered how much that could get me in SE Asia so unfortunately had to move on. We did however find Dawes Point, which made Simon’s day. Next stop was Hyde Park, to check out a bit of the scenery and do some general window shopping. There are loads of luxury shops in Sydney and window shopping could be positively cruel in this respect. I love the architecture however, old and new often sitting side by side. My favourite has to be Victoria shopping centre. 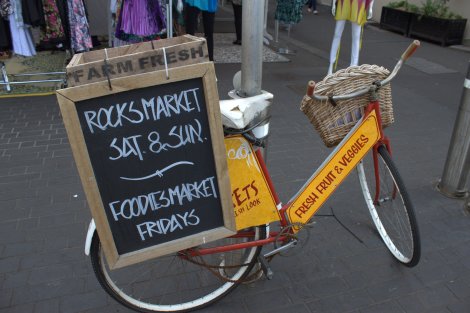 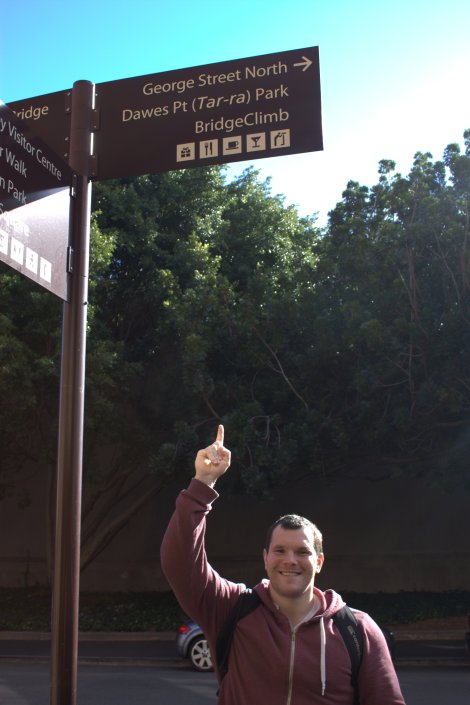 A Dawes at Dawes Point 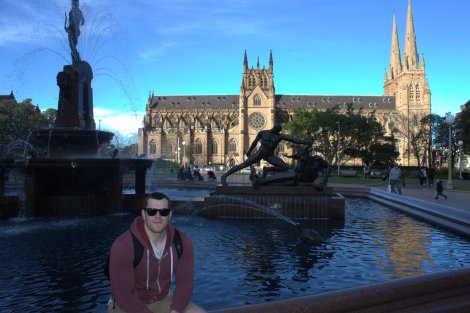 An example of the contrasting buildings.

I know you’re tired of reading by now, but wait, I’m not finished! Determined to fit the most into our day, we then caught the bus to Bondi Beach. The Icebergs club is possibly one of the coolest swimming pool designs I could ever imagine, but also I’m guessing one of the coldest in the winter months! Summer must be amazing here. I absolutely loved watching from above! A surfers paradise, there were a small group sitting out on the waves constantly. 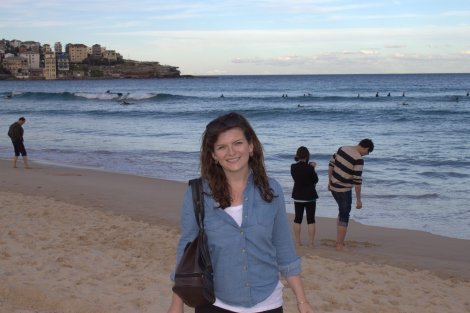 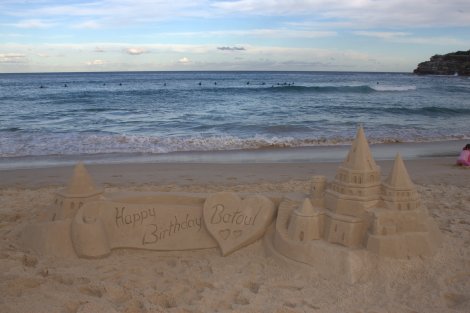 And the award for best sandcastle goes to… 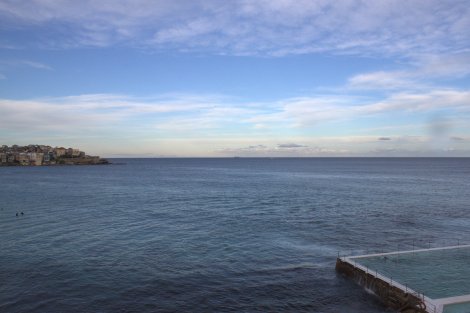 Gorgeous Icebergs club pool jutting out into the ocean… 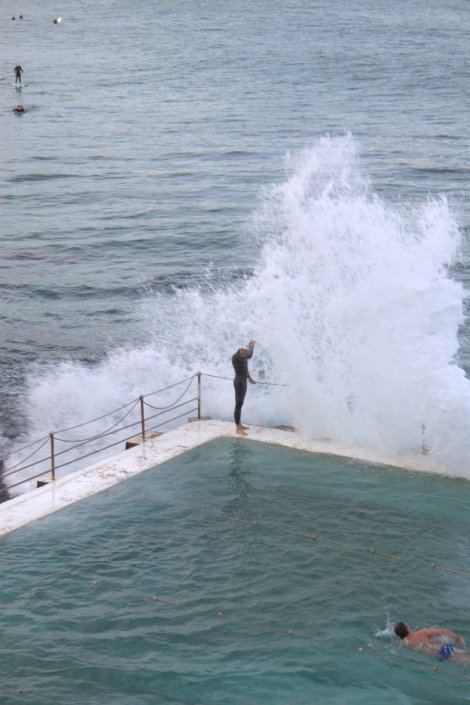 This does mean however that this can happen. Splash!

Catching the bus back to central, we decided to go for a dip in our own pool, up on the roof of the hostel. Not many hostels boast a rooftop pool and sauna, but YHA is positively 5 star in this respect, so we had a sauna session over looking the city before jumping in for a well earned dip. 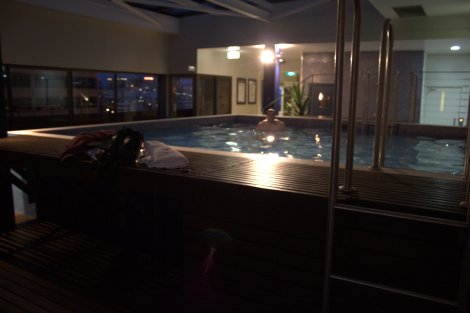 Chillier than it looks… 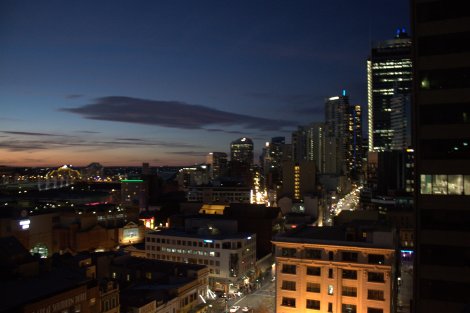 …but you can’t argue with that view.

Over and out amigos,