I love this picture. Toddler looks on as the bride and groom’s hands are joined.

The marriage season in Jodhpur is in full swing and as promised I have updates on the matrimonial marathons. I’ve already attended as many wedding ceremonies this week as I have in my whole life so far (having been a guest at only two weddings back in Blighty) after attending one sangeet and two indian wedding receptions alongside witnessing the official ceremony at one of the occassions. I’ve already been invited to another wedding this Saturday and Sunday, so come January I may be an Indian wedding professional. Maybe I should start writing reviews at this rate! 😉

Wedding #1: The bride and groom exiting the stage after hours of photographs.

Neetha kindly took us to a big wedding ceremony on Thursday which was fantastic. The wedding was for a couple from prominent Brahmin families in Jodhpur and so I say big wedding, but it was absolutely H-U-G-E. Like, seriously, I’m not sure I know over 3000 people, but they managed to have that many invitees.  Will and I got a tuktuk seperately and so spent a good ten minutes trying to establish we’d actually walked into the right wedding venue before we spied familiar faces. The girls from the night before  present and absolutely lovely, so it was nice to spend some time with them. Plus the food was absolutely incredible (catering for 3000 people is no easy feat in itself!) including dosas, samba, idly, dal, rice, gulab jamun, vegetables, a multitude of other stuff which I had absolutely no idea existed so Will and I were kept occupied for a good idea just familiarising ourselves with the food etiquette at weddings of this size. Turns out, you just shove your plate under the caterers nose just as he finishes cooking and then hurry off to the next food counter in order to complete the rounds. The best part of weddings though has to be the clothing, I could watch people go past all day. The outfits are absolutely incredible! I met some really cool folk too, alongside the odd ill-mannered person who wanted to take photographs of us inches away from our faceswithout asking for permission (a few passive aggressive exchanges were made – JUST ASK ME) but hey, with 3000 people around it’s gonna happen. 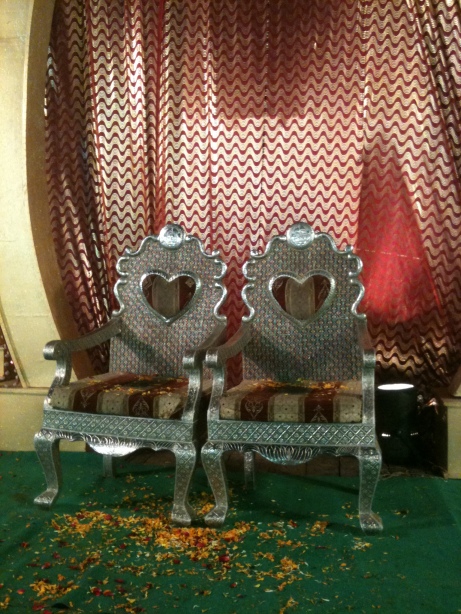 As part of the reception, the bride and groom sat on a large stage complete with thrones so that all their guests could have photographs with them. It was a really beautiful set-up and its a great idea for making sure you get a complete wedding album, the couple looked absolutely exhausted by the end of it! Hours and hours of holding a smile is harder than it looks! We went up and had a few photos ourselves, I tried to tell the bride she looked beautiful in hindi but am slightly concerned I may have unknowingly said something else by mistake (“Aap koobsurat hai”?). Either that or I was the first person who had spoken to her in a while, Indian weddings have lots of rules which seem to go over my head!

Over 3000 people attended the wedding, complete with large stage and photographers for the bride and groom.

In other news, I almost *almost* wore a saree for the occassion as Manju and I made an attempt to make me look pretty for the wedding. The fact that Manju even attempted to help me in this made me love her even more as she doesn’t usually wear sarees and so we had to figure it out step by step. I turned by topshop body suit into a makeshift saree blouse and we played around with how to fashion it for a while before realising it probably wasn’t nice enough for such a grand occassion. I hadn’t worn a saree before though, so here is a photograph of our efforts:

I’m glad to say I have purchased my very first saree since, one that is a bit more bling-bling and wedding appropriate. Photographic evidence will appear at some point! 🙂

Friday was time for wedding #2. This was a much more personal affair, with the official ceremony taking place within the family home before we met up with everyone else at the reception venue. The groom arrived on a white stallion, greeted by gifts, a large band and fireworks. The horse looked suspiciously close to full on freaking out at one point as firecrackers went off left, right and centre but made up for it by looking awesome 🙂 and once again I was lucky to meet some amazing people in attendance.

Once inside the home, the bride and groom were blessed and their hands bound together before sitting down by the fire they would later walk around. The bride looked beautiful once again, but I must admit I did feel really, really sorry for her at times. To the point where it started to make me feel uncomfortable and slightly voyeuristic to her sorrows – hence my retreat to play with the little kiddies. She was absolutely distraught for quite some length of time and must have sobbed for like two hours straight. I’ve since been reassured this is completely normal, as its the first time she’s properly leaving the family home and its actually quite insulting if the bride is not upset when leaving, so sometimes the bride is even encouraged to cry as a sign of respect. It’s understandable, I suppose if you’ve never lived away from your parents before it is pretty terrifying in itself, especially if you’re leaving to live with a man who you don’t really know. He could genuinely be the nicest bloke on the planet, but at this point they’re still essentially strangers to one another.  That said, although arranged marriage isn’t something I personally subscribe to I’ve met lots of couples here who adore one another and whose marriages were originally arranged, so hopefully she’ll be happy soon enough and the groom did actually seem like a nice bloke by all reports. Still, I was happy when we set off for the reception and started to celebrate properly! Love marriages aren’t that common in Jodhpur yet  and tend to be the exception rather than the rule (although I do know some people here who have had them and lots of younger people especially have already told me they want to have one), so both weddings I’ve attended so far have been arranged.

Walking around the fire seven times is an integral part of the wedding ceremony.

Even my favourite little man Bhanu had a role to play 🙂 Bahoot Achaa!

The reception was different to the day before, smaller (although still reasonably large) and it turns out Brahmin and Rajput castes do things slightly differently. The Rajput reception was much more conservative and had separate sections for men and women, so I hung out with the ladies and children for the evening. It was actually really nice to hang out with Manju, Bhanu and Neetha so I’m not really complaining. Once again, the food was scrummy and we were very well looked after. Alcohol was only available in the mens section which annoyed the feminist within, surely if you’re going to take a stance against or for alcohol – all or nothing guys? But whatever. Sometimes I have to remind myself that this isn’t my culture and so it’s not always right to impose what I’m used to. That said, To make up for it I made sure I grabbed a cocktail at Park Plaza the day after 😉

ps. Kittens have taken up residence in Achal Niwas. Ahhhhhhhh ! The mission to stop their eviction begins…

One response to “Matrimonial Marathons Continued”