For the first time this morning I actually noticed that I was improving at Yoga. After sleepily convincing myself to drag my body out of bed, wash my face and heave my mat up to the roof – promising myself I would return to bed shortly after – I found that I not only woke up, enjoyed myself, but also impressed myself just a little bit too.

Okay, so a bit of background may be required. This is my fourth day of practicing Yoga and I’m a complete amateur. I went to approximately three yoga classes in Oxford with my good friend Hannah, but due to class time falling right on my essay deadline and a limited amount of mats available, the zen and karmic world of Yoga quickly got sacrificed to the god of all-nighters and last-minute organisation. Not very soothing at all! In fact, the best part of it seemed to be lying on the floor at the end, mainly because of sleep deprivation. Despite starting at 5.45am, my yoga lessons in India have been very different.

Firstly, I have actually been making an effort to try and get some sleep. I’m not sure it matters how much shut-eye I actually get however, as I will always feel tired – at least at first. But it does appear to be making a difference. By 10pm I am now usually out like a light, and if the clock starts creeping towards 11 I am positively a dead person walking. This makes staying awake in Yoga much more achievable.

Secondly, being in a small class really does make a difference. In Oxford, Hannah and I would rush in (naturally running slightly late to every session), grab whatever mats we could and toddle off towards the back of the class. Not only did we have no idea what we were doing half the time, but the people infront who were positively tying themselves in knots without even the slightest difficulty were very offputting. Who wants a lycra clan backside in their face? Unless you’re in one of Eric Prydz’s exercise classes, it’s unlikely. As there’s only 3 of us in class now (Bharat has started bringing his indian pal along, luckily he’s as hopeless as the rest of us) Bharat notices straight away if you’re doing something wrong, will always correct you until you do it the right way and the only view in front of you is the sun, moon or stars. Not bad for doing it on the cheap!

A picture Will took on his iphone of us finishing up…

One thing that certainly shouldn’t be overlooked here is also the scenery. Admittedly, it probably isn’t having any influence on my yoga ability at all, but it makes it that bit more enjoyable. When we start, there’s nothing but the moon and stars in the sky. Jodhpur is never this quiet in the day! It’s almost as if all the dust, pollution and smog has gone too, as you can actually see the constellations. This is a rarity I can never enjoy properly when all the city lights are on. The market clock chimes, you can hear temples beginning their morning prayers and the only real movement is either the street dogs or the many birds flying overhead. I love the gradient from yellow to blue that appears for most of the session, and when the sun first rises it is a delicious colour of red before becoming a burnt orange and then the bright yellow we are all so familiar with.

Now when we first began four days ago I could do most of the basic stretches, was completely hopeless at grabbing my toes  and the crab posed some difficulty. I could only do the simple pose for sitting and any attempt at lotus seemed futile. Now I can do the crab with relative ease and I managed to do lotus today! Admittedly, I couldn’t hold it for very long – my legs seemed to lock and then the pain came in once I’d manipulated my legs into the shape – but all the same, that was totally unbelievable four days ago! I’m going to a yoga ashram in December and at this rate, I might be able to do it by then! As the weeks go by the positions will get harder and harder – and yes, I’m still struggling with the toes thing, damn you hamstrings – but I feel like I’ve made a bit of progress already. Hurrah!

The lotus position: A cross-legged sitting posture originating in meditative practices of ancient India, in which the feet are placed on the opposing thighs.

Then in the perfect way to top it off, as I sat eating my brekkie, Jodhpur’s resident Elephant went by on its morning walk. Today is going to be a good day. It’s Es’ farewell meal this evening, which will be sad I think, but also a nice way to say ‘ta-ra for now’ to a lovely person. Feeling positive. Thankyou Jodhpur! 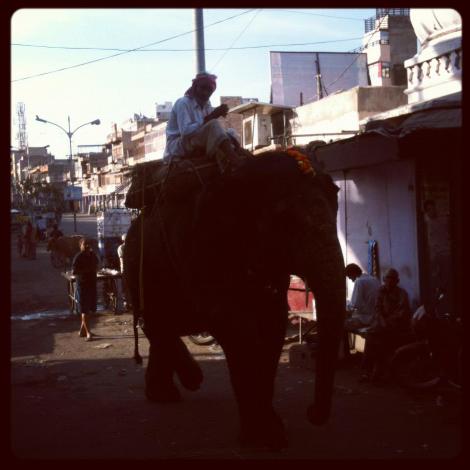 Nelly going for a stroll another day in the Market…

Error: Twitter did not respond. Please wait a few minutes and refresh this page.