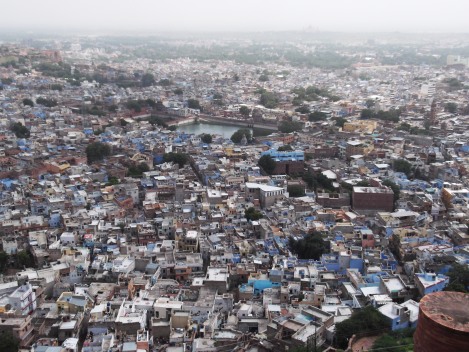 I’ve been in Jodhpur for almost a month now and more than once I’ve wondered what it would be like to be a woman living here permanently. Nothing brought this into focus more than hearing today that my fellow female intern will be leaving us shortly to return to Delhi. I realised that the sudden sense of upset that swept over me was not only because I felt like I was losing a friend, one I found I shared a common sense of humour with and conversation flowed with easily, but also because I was losing a female one.

Of course this could be explained away as a natural reaction, a inherent leaning toward female company due to my own biological make up. I doubt this for a number of reasons however. Firstly, at home I often feel more at ease in male company. In fact, I actively seek it out. I’m happy to be the only female in a group and have never shied away from participating in an otherwise masculine pursuit. I don’t feel intimidated by men and certainly don’t feel inferior – any feeling of self doubt in this area is quickly quashed by the mini feminist within. So apart from the understandable feeling of grief that comes with a friend (even if only for a short while) moving away, I can only really attribute the instantaneous loneliness to not just craving female company, but more specifically craving female company in Jodhpur. Es has been the biggest female presence in my life for the last 3/4 weeks now and now I’m left wondering how to get my female fix in her absence.

I don’t want to be misunderstood, the women in Jodhpur are not unfriendly, nothing could be further from the case, just that culture dictates that they are either home or often reluctant to speak openly in public places.My landlady Manju is probably the closest thing I have to a true Indian female friend in Jodhpur. She’s lovely, very funny, one of those motherly types and quite open about her opinions of Indian culture in all its aspects. Yet as a married woman, Manju is often restricted to the household – she wasn’t allowed to leave the house for five years after her marriage – and whenever she does go out she must cover her face around her own caste, not being able to show her face to even her own father in law who resides under the same roof. As much as I love spending time with Manju around the house, occasionally making excursions to the market in her company, I’d love to be able to go out and do things with her, indulging in some girly fun. I’m sure Manju would too, in fact I know for sure she would, she’s told me so, but culturally its just not that simple and she always has lots of work around the house to do. In Mumbai, Delhi or Kolkata women generally won’t have as many restrictions (a friend of mine in Kolkata is very career minded and free spirited – I can’t imagine anyone telling her what to do), but not in the more conservative Rajasthan just yet. Of course, I could be completely wrong – I am only experiencing one perspective after all – but the sheer fact I know many, many more males in Jodhpur than women would suggest that men here are freer to come and go as they please. At least in my experience so far.

The next female presence who reoccurs the most in my life at the moment is Bindiya, a little girl who sells necklaces on the street. Always dressed in her colourful salwar kameez, with nothing but a great big smile and an armful of beads to accompany her, I greet her every morning. I learnt from a local tuktuk driver that her father died and she now attempts to support herself and her mother. She looks as if she should be in school, perhaps starting year 7. It upsets me that she isn’t there – another reminder of how lucky England is to have a compulsory school system. I must currently interact with Bindiya for no more than ten minutes a day, which says a lot about the female interaction I receive here. She’s very outgoing, however as a tourist I’m not sure what I offer her other than an opportunity to palm off some beads. I enjoy speaking to her anyway, and will continue to say hello!

Manju’s sister in law is more than happy to go on excursions with me which is good. Her freedom seems to stem from the fact that she is widowed but she’s away at the moment and I’m not sure her own marital situation doesn’t present problems in itself. Everything for women seems very complicated here!

Anyway, what I think I’m trying to say is that I’d really like a close female friend in Jodhpur and I wonder if women in here feel the same way / also find it difficult to find female friends. I suppose if I was truly Indian I’d have a full network of family, fellow caste and friends ready made by now but then again lots of women move towns to be with their husbands when they first marry. The next obvious place to make friends would be at work or school but what if your family wants you to stay at home? Manju had to leave school when she was young because of a family loss, and she often tells me she felt very lonely then. She’s now very happy as far as I can tell but I think she will be very sad to see Es go too. Hopefully we’ll spend lots more time together in the meantime though. Friends are precious, female ones even more so.