I don’t think I’ve seen any train in Perth, never mind to Joondalup, as packed full of pretty young people as yesterday.  The shorts were super short and the vests just a little bit too tight as everyone piled in to make their way to Future Music Festival 2013. I almost felt a stab of pity for those whose quiet Sunday afternoon route was bombarded with rowdy twenty-somethings, but then I remembered I was one of them and starting singing along instead.

The expected attendance of the festival was 45,000 people and I don’t think it could have been much more than this, as it seemed really busy, especially in the oh-so-sweaty epicentre, but not to the point where you were worried about being physically crushed and trampled like some festivals (cough*Parklife* cough). The weather was scorching at 30c plus, so for the first time in my life Havianas were also acceptable festival attire, or as the Aussies call them ‘thongs’,  although I did squeeze the old Converse in my backpack for a bit of jumping up and down at the headliners (lifesaver).

Line up at Mariachi

There were five big stages at the festival, all of which specialising in different types of music. We practically made camp at the ‘Mariachi’ stage for the day thanks to the awesome lineup and the fact that my cous was doing the sound, only making exits in favour of Steve Aoki, Cocoon Heroes (Ricardo Villajobos, Seth Troxler, Richie Hawtin) and freebies courtesy of Lipton Ice Tea (Simon took at least thirty cups of free tea, if he’d stayed any longer he would have been on first name terms with the staff). The first group we went to see was Fun, who I only really knew one song of –  ‘We are Young’ –  but they were great so it didn’t really matter. Water cannons kept being let off at the crowd to stop us all passing out from the heat (Azealia Banks made a big thing of this after coming from chilly New York: ‘IT’S SO HOT!’) and generally everyone was having a good time – only to go crazy when Fun played the one song everyone actually knew of course. 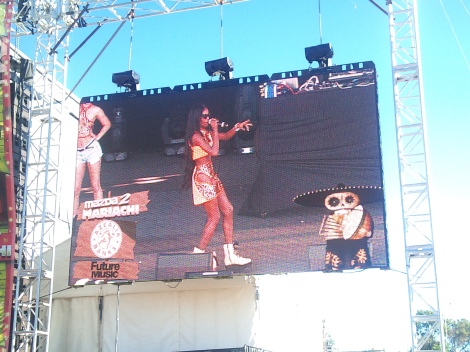 Next up was Azealia Banks who appeared to have modelled her whole stage production upon some kind of weird synchronised swimming safari. I say this not because she was rubbish – she was awesome – but because her dancers wore lycra tiger print swimming caps throughout the entire performance (which the cameraman clearly thought either very attractive or hilarious as he seemed to spend most of the performance zooming in on the male dancer’s lycra clad head). To be fair, they were pretty incredibly classically trained dancing duo, so they probably could have worn whatever they liked. After trying my best to keep up with Azealia’s ludicrously fast rapping for about half an hour, I gave up for the huge Harlem Shake that inevitably engulfed the whole crowd and to go slightly insane for 212. So. Much. Fun. 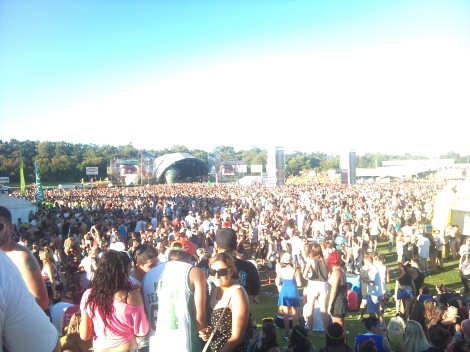 After Miss Banks we went for a bit of an explore, stopping to examine the many possible freebies before sitting down in the sunshine for some minimal techno at Cocoon and then dancing like mental at the absolutely huge Future Music stage with Steve Aoki. Once my voice was husky from screaming out the lyrics of ‘Theres a party on your face and I’m ‘bout to dance on it’ for the umpteenth time, we heading back over to band stage once more for a bit of The Temper Trap. Si personally was not a fan but I surprised even myself with the amount of lyrics I seemed to have engraved into my memory on many trips back and forth to the English Faculty back in Oxford. Live performances can always be a bit hit and miss, especially I find when a male vocalist has to keep up a soprano range for an hour, but they were spot on throughout. I’d always loved their music anyway, but they only went up in my estimations – a sign of a great gig!

Unfortunately The Stone Roses had the complete opposite effect. The only way to describe it really was just lacking. Lacking in energy and enthusiasm and I suspect to be fair, tinged with technical difficulties, one couldn’t help but wonder if Ian Brown even wanted to be there at all. There were points where he was difficult to hear, his words seemingly slurring into one big long mancunian sentence and he didn’t even acknowledge where he was, only shouting ‘Manchester!’ at the beginning of the set. It’s a shame because I was really looking forward to seeing them only to summarise that they really aren’t that great live. They pulled in a more varied crowd yes, but if I was one of the punters who had paid for a ticket just to come and see them I would have been pretty annoyed. To add salt to the wound they ran over by twenty minutes, meaning that Bloc Party’s set had to be cut short as a result.

In spite of the time restrictions however, Bloc Party were incredible. Everything about their set, from the well-thought out lighting to the sound and the performance was spot on. Kele interacted with the audience, verging on comedic levels of control at points and he sounded awesome too, meaning that every time he told us to jump we all seemed to desperately shout back at him ‘HOW HIGH?! TELL US HOW HIGH KELE!!!’. It was electric. Every time I turned round to look at Simon I saw him repeating every single word, only taking his eyes off the stage momentarily to shout the lyrics ‘as if to say he doesn’t like chocolate!’ directly at my face. The band used the stage space really well, Kele jumping up and down all over the place, lying on the floor, guitars being thrown about and the drumming, well, the drumming was about as heavenly as drums can get – reflected clearly by the amount of imaginary drumming going on in the crowd. By the time we left we looked like we’d been stood under a shower, a really exhausting and happy shower. 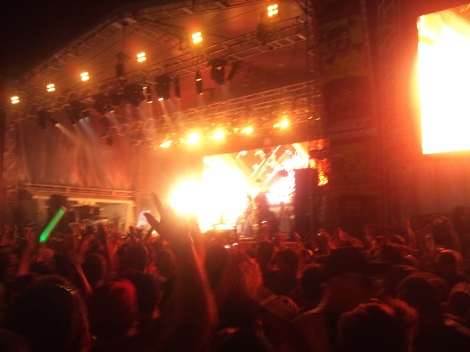 Over and out amigos