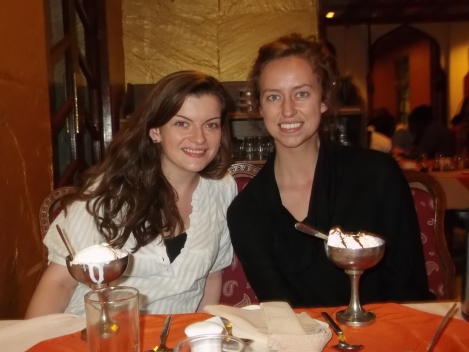 At Kalinga before the Station

As predicted, our landlady did not take Es’s leaving too well. I believe Es was doing the right thing in order to get well again but M was so upset, bless her, that she managed to work herself up into quite a state. Triggering Es to then do the same, Manju quickly resumed the motherly role she is usually so apt at, promptly comforted and managed to guide everyone through the leaving process. Before we knew it, everything was packed up and we were off to the station for a meal before the express left at 11pm.

Abid, our favourite friendly tuktuk driver was waiting outside. His usual price, summarised by the Indian phrase ‘as you like’ along with his continually genial and slightly eccentric manner summarises his popularity! It’s funny how quickly luggage can accumulate, especially in a country where everything is so cheap. Es’s 80 litre rucksack (yes – I was very impressed by her lifting skills!) had expanded into another holdall and backpack and cloth bag to match… Abbid’s eyes as the tuktuk was loaded was therefore quite the sight! Having piled up the tuktuk and squeezed in, we then headed to Kalinga, a restaurant by the station connected to a local hotel. Walking into Kalinga felt like walking into an Indian restaurant in England. Stereotypical decor and full of little dining booths. Having dragged Es’s entire Indian life from the autorickshaw in we quickly ordered the thing we were craving most – meat! In a response to my diet consisting only of rice, roti and curry for the last month I went for chicken, egg, pineapple and chips. It was yum – even if I did feel more than a bit dodgey afterwards!! We also had a bit of a run in when we suspected the chocolate sauce on our ice cream had brandy in it, causing quite the furore as the waiters tasted it themselves and realised that something wasn’t quite right! The fact that we had chicken however seemed to make everything okay.

Will and I were more than familiar with the taboo surrounding chicken in Rajasthan. Will in a moment of carnivorous necessity had popped over to Punjab chicken corner (described to myself as essentially a collection of chicken outlets huddled around a road bend, frequented only by local males and therefore totally tourist free) but because our guesthouse is a strictly Hindu vegetarian household, we had to satisfy our craving by the local lake. I say lake, but more like rubbish-tip-come-religious-site-gone-derelict-filled-with-water-thing. Eating my chicken tikka by the lake is probably the closest I will ever come to understanding how a junkie would feel – we got plenty of stares! As my boyfriend Simon joked over skype, it was ‘Class A’ chicken in every sense of the word…

I’d never been to an Indian station before, so it was a relief somewhat to go in and see what it was like with Es rather than braving it for the first time on my own – fear of the unknown and all that. I think Es may too have been glad of the extra hands and the company! It was quite late in the evening but the platform was still bustling with families, some units having 3 or 4 different generations all sat together on the station floor. Taking the lead from the locals, we too claimed our bit of platform and set up camp until the  train arrived. I thought Indian trains were better with timings than in England but this one was twenty minutes late, giving us plenty of opportunity to people watch in the meantime. One particularly humourous moment was when an opportunistic child came over and asked us for money. Upon receiving our reply that we didn’t have any, he threw a pencil at us. As Es highlighted, you know you’re winning when you start gaining things from beggars instead!

Es was travelling 3AC, so we hopped aboard the train in an attempt to help with luggage and joined the carriage crush within. The smell of the train toilets hit me straight away –  I don’t think the guidebooks are exaggerating when they outline their notoriously poor hygiene standards! The whole thing though is really very civilised though, every one went to their bunks and set themselves up for the night. I doubt you could have beds on trains in England like that – all hell would break loose! Es, at over 6 foot, negotiated a swap to a side bunk so that she had more room, and then there were two!

After spending about twenty minutes haggling with the rickshaw drivers outside (Abid had gone back home to bed) Will successfully sorted out our 40 rupee fare and we headed home again. Goodbyes can often be a bit of a weird thing I think, you never know what to say or do, or at least I don’t. That said though, I think Es will have a wonderful time in Delhi -I geniunely do – so I’m planning my visit already! 😉